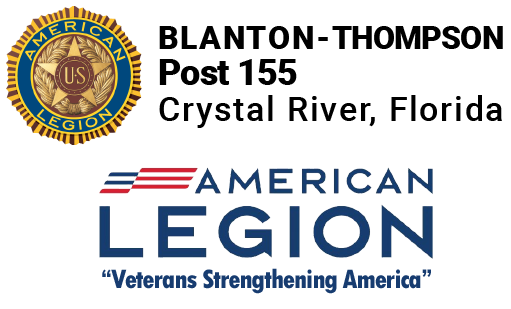 Welcome to the Blanton-Thompson, American Legion Post 155 of Crystal River, Florida. The American Legion was founded in 1919, and we are the Nation’s Largest Veterans Organization, representing more than 2 million members.

THIS POST WAS NAMED IN HONOR OF TWO CRYSTAL RIVER, FLORIDA SERVICEMEN OF WORLD WAR II.

First Sergeant Blanton was killed in action on Okinawa June 24th (no year available). First Sergeant Blanton was born, raised, and graduated from high school in Crystal River, Florida in 1933. He enlisted in the US Marine Corps in August 1933 and attended Boot Camp at Paris Island, South Carolina. He served seven years with the Pacific Fleet aboard the USS West Virginia, and he survived the Japanese attack on Midway Island, December 7, 1941. He returned stateside to attend advanced Artillery training, then onto First Sergeant School in Philadelphia, Pennsylvania. Upon completion of his advanced training Senior NCO training, he returned to the Pacific Theater where he was engaged in several major campaigns until his death.

Air Cadet Thompson was a 21-year-old Crystal River native who was killed while conducting flight operations as a pilot while training at Avon Park Airbase. R.R. (Buddy) Thompson was the sixth Citrus County servicemember to be killed in the Armed Forces after Pearl Harbor Day. The crash site was twelve miles from the airfield and the cause of the accident was never determined. “Buddy” volunteered for the Army Air Corps and was assigned to Maxwell Field, Alabama for Flight Training. “Buddy” made a few trips back to Citrus County to visit his father before his sudden death. Air Cadet Thompson was buried in the Crystal River Cemetery.

To enhance the well-being of America's veterans, their families, our military, and our communities by our devotion to mutual helpfulness.

A VETERAN IS A VETERAN - which means The American Legion embraces all current and former members of the military and endeavors to help them transition into their communities.

SELFLESS SERVICE - which means The American Legion celebrates all who contribute to something larger than themselves and inspires others to serve and strengthen America.

AMERICAN VALUES AND PATRIOTISM - which means The American Legion advocates for upholding and defending the United States Constitution, equal justice and opportunity for everyone and discrimination against no one, youth education, responsible citizenship, and honoring military service by observing and participating in memorial events.

FAMILY AND COMMUNITY ENGAGEMENT - which means The American Legion meets the unique needs of local communities.

ADVANCING THE VISION - which means The American Legion educates, mentors, and leads new generations of Americans.

HONOR THOSE WHO CAME BEFORE US - which means The American Legion pays perpetual respect for all past military sacrifices to ensure they are never forgotten by new generations.